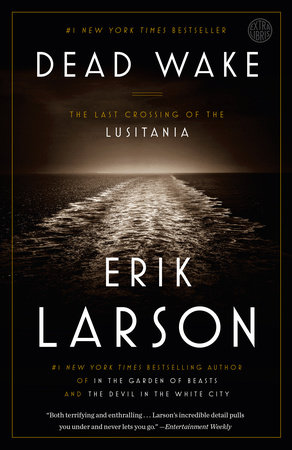 This post is the second in a series of Summer book reviews publishing to 12 and Beyond in the coming months. The full collection can be accessed here.

Of all the variety of literature that I’d been exposed to in Freshman English (ranging from Shakespeare’s sonnets to the satire Animal Farm), I’d yet to read a true nonfiction book this year.

But naturally, I’d resent having to read through one structured like a textbook, so I sought out one that was more of, well, an experience. And I found exactly that in Erik Larson’s Dead Wake.

I’ve read many books concerning World War II (one of my favorites being All the Light We Cannot See), but Dead Wake took on an entirely new aspect, one I never thought I’d have that much interest in: naval warfare. But the way it was portrayed in the novel could evoke fascination in any reader.

Dead Wake primarily surrounds the crossing of the Lusitania, a British passenger ship carrying many American passengers, as it passes through German warfare amidst the threat of torpedoes. Given that all this takes place at the time of American neutrality, where German forces would do anything just to create trouble, the impact of such a sinking would be monumental.

Yet, if that’s not enough of a conflict, Larson’s narrative takes the reader behind the scenes of the war and exposes the inner workings- and particularly the ignorance, neglect, and manipulation- of both parties (the German and the British), that partly led to a disaster that could have been entirely preventable.

This omniscient perspective is incredibly powerful at evoking emotions from the reader- as more and more components were revealed, I couldn’t help but anger at how blatantly obvious decisions should have been, and then feel helpless as things continued to fall into place.

This astounding portrayal exemplifies at intertwining comments about the horrors and tyranny of war, especially as told through a variety of accounts. Between the uninformed and inexperienced shipmen of the Lusitania, the neglect of the Lusitania by the British in focusing on ‘more important ships’, and the ruthlessness of the Germans, the magnitude of such depictions is incredibly overwhelming.

Even the subtle irony found within the book epitomizes the repercussions of war, especially when viewed from (at the time) a war-weary perspective, as in this quote:

“We are still in our old positions, and keep annoying the English and French. The weather is miserables… days on end knee-deep in water… under heavy fire. We are greatly looking forward to a brief respite… Things can’t go on like this forever. The author… Adolf Hitler.”

Furthermore, the attention paid to details was so intricate. The reader gets a truly comprehensive viewpoint of the war itself as told from all angles, instead of just focusing on the sinking of the ship itself. Even the lives of the average (or above-average) citizen, with representations of various classes, personalities, and ideals, brings humanity into the culmination of the war, fabricating a heart-wrenching narrative.

And all this from a nonfiction book.