For this week’s edition of In Tune, I am slowly edging my way into the pop corner of music- but not there yet. Though I am mostly a pop music listener, I’ve been trying to discover new types of music, new artists, and songs that stand out in so many different ways. See, for most of my life I’ve been solely exposed to local radio stations that play pop and nothing but. Now that music streaming has taken over the world (and my life), I’ve been able to broaden my music taste into so much more: from piano melodies to Ed Sheeran‘s Supermarket Flowers.

I know this song was released only five days ago- but it caught on so quickly for me. Here’s the song I chose to highlight today- and why: 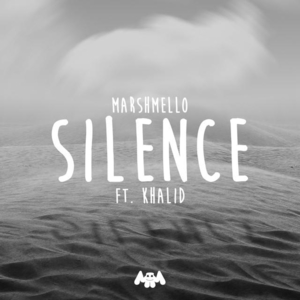 You’ve probably heard Silence- it’s already up there on the charts. From what I understand, it’s Khalid who does vocals and Marshmello who provides the beat and instruments that perfectly follow the lyrics- only with my favorite bit of EDM that follows whenever Khalid says “I’ve been quiet for so long”. So, big credit to Marshmello- the song wouldn’t have been the way it is without the beat behind it (as with any song).

Today, though- I want to focus on Khalid. I first discovered him when Apple Music chose him as their “Up Next” artist. Normally, I don’t listen to a lot of R&B music, but I quickly became a fan of Khalid’s voice- and that was more than enough for me. But believe me- his songs are great too- it was when Khalid released the song Location that I began following him.

With Khalid’s music, he blurs the lines between a mix of R&B and other genres, like how this song (Silence) is considered a dance song (which I don’t necessarily agree with- but whatever). I can tell that there’s a bit of soul music, a bit of R&B, a bit of pop & dance (but not primarily) in Marshmello’s EDM parts. I love it.

And Khalid’s heartfelt vocals in Silence- there’s something so different in his voice that really moved me. It seems to go along perfectly with the lyrics of the song, which speaks greatly about hiding away and forced to stay quiet; finding piece all the while feeling helpless. I’m about to steal this word from an Apple Music bio for Khalid- but his songs truly do show sincerity. I couldn’t agree more.

For me, there isn’t much else to say about this song- it’s just incredible.

However, if I were to add in something- I finally found out how to correctly pronounce Khalid’s name after hearing Zane Lowe on a Beats 1 show. I kept pronouncing it like DJ Khalid (two totally different artists), and I’m glad that there is something else to differentiate the two.

Going back to the song though- I think you (whoever you might be) should have a listen. I was inspired by it- and whether you are a pop person, a rock person; whatever genre of music you listen to- I can assure you it’s at least worth a listen. As I’ve said, Silence brushes the edges of more than just R&B. So check it out- whether it be from your choice music service (I use Apple Music), or click here for the official audio on YouTube.