From June 22 until July 1, I took a Cross-Country trip from Chicago to California, and from California back to Chicago. I’ve blogged about photos, highlights, and experiences, which you can view on the Traveling Beyond category. This post, however, is a culmination of everything the trip meant to me. It was my first time leaving the East Coast, and boy, has my life changed because of it…

The first part of our trip was a plane ride from Bradley to Chicago. I hadn’t been on a plane in 11 years, but I  really enjoyed it (despite having a fear of heights and the window seat). I was just amazed by the clouds- being over them, in them, and through them. And then, being completely over every cloud, to see nothing but a clear, blue sky, was fascinating. When we weren’t engulfed in clouds, I could see massive rivers (not to mention the massive Lake Michigan), miles and miles of forest and fields, and then coming into Chicago, miles and miles of city. The landscapes changed so quickly, and they differed so much from the type of life I’m used to. The plane rides I took on my trip were something completely different, especially when we took a night one, and saw nothing but endless city lights. It’s a totally different perspective. Throughout the trip, I kept thinking, “Wow. This is my country.” 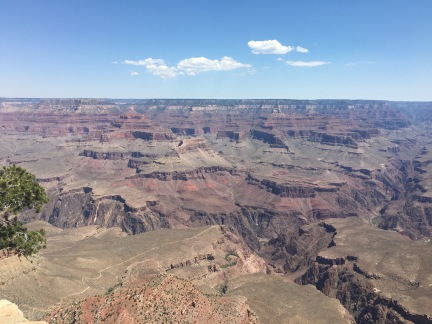 I do have to say, though, that the best part of the trip was the Grand Canyon. In transit to the canyon, though, I was very intrigued by the wildfire happening just outside our window- the smoke from it alone was fascinating (though that’s all we could see of it).

Grand Canyon, sweet canyon. You don’t see anything like this, anywhere. We stayed on the rim, but the scale of the cannon was massive- and to think that it goes on for 277 miles? Wow. The only words that came to my mind were, It’s so beautiful.

I speak about tear jerkers on this blog a lot- songs, books, but the Grand Canyon is one too. Just the way the colors and layers of rock blend together, and the fact that Nature created all of this… it’s like a blessing from above.

Pictures could never do it justice- you have to see, in person, the endless canyon that fades off into the horizon, the Colorado River that looks massive even from a mile up, and the infinite gorges and hues that make the Grand Canyon, well, the Grand Canyon.

Before we get into California, let’s talk about the 1600 miles between Chicago and the Grand Canyon. It was all farmland. I don’t live in a true city, but it’s not farmland either. I was amazed- there were miles of corn, miles of cattle, silos every which way, freight trains that barreled by every few minutes.

And not to mention the natural architecture, too- the rivers, rapids, fields, plains, hills, and snowy mountains our train followed; by the way- SNOW!?

When I thought about it, you really gain an appreciation for the entire expanse of the country by traveling through (and above it), particularly when realizing that, in the same country, you have cities, lakes, infinite farmland, and a 277-mile canyon that just happens to run through Arizona. The way I thought about it, the country is divided this way: on both ends, there tends to be (with exceptions) more populous areas, city areas, and of course, the coastlines. But as you move Eastward or Westward, the landscape quickly changes- less populous, farmland, more spread out.

Nature is so wonderful- and yet you still often come across so many man-made features that are just as spectacular, like the Golden Gate Bridge in San Francisco. The Golden Gate is definitely one of the many symbols of our country, and for good reason. There’s so much symbolism in looking across San Francisco Bay and seeing the Golden Gate just before the horizon.

Going back to natural wonders, though: the Muir Woods Redwoods. They are massive: 5-foot trunks, towering heights, some thousands of years old. I’ve also mentioned their distinct scent, and the distinct feel of the wood from a felled tree. It’s another gift of nature.

Alcatraz had (naturally) a totally different feel to it, but of course. While I believe it was closed for good reason (I’m a bit iffy on the Alcatraz’s idea of solitary confinement…), it remains an important piece of American history that needs to be remembered for the future.

If there was one thing in Chicago that stood out to me, it was the architecture. We ended up taking an architecture river cruise, and we learned about the history of these buildings (and the city itself), the impact of the Chicago fire, and about the designers who made Chicago the way it is. I personally loved the glass-faced buildings, but I also really admired the feat that it takes to pull of any of the buildings we saw- the curved buildings, the rectangular ones, flower-shaped parking garages, the v-shaped buildings… For the three days I was there, I gained so much of an appreciation for the city, it’s people (people are awesome- and it was very interesting to see so many different cultures throughout the trip), and our country as a whole.

And that’s one of the main reasons we took this trip- to gain an appreciation for the country that I live in, the one I’ll grow up in, and explore even further. Not only that, but the trip gave me a strong sense of national pride, pride for my country, that makes me proud to be an American.

My grandfather’s wish was, when taking me on this trip, to get a taste of our country, to form a desire to return. And I have exactly that. So, Pepere, if you’re reading this, thank you for the experiences, memories, and bonding that I’ll never forget.

4 thoughts on “My View of the United States”