Very recently, a series of events occurred that were both heartwarming- and heartbreaking. It was almost a miracle, and so I wanted to share this story with you:

A few weeks ago, my younger sister was outside on our patio, in the process of trying to move a metal table, when all of a sudden, a calico cat darts out from beneath our house and passes right by her. Out of curiosity, she investigated the area that the golden, white, and grey cat had come from, which was the indent beneath our house. From where she was standing, she could hear distant ‘mew’s coming from the area, and eventually investigated the area near our basement’s windows, like these, except below the indent:

My first involvement with this story came when I happened to glance out of the kitchen window to see my sister frantically waving at me to come outside, and boy, was in for a surprise. Tucked within the semicircle were three kittens: one grey, two gold.

These kittens were literally a day old, and coincidentally were born on my youngest sister’s birthday. (This had devastating consequences later). I swear, when looking at them, blind and cuddled up next to each other, they looked exactly like this, except there was a second gold one as well: 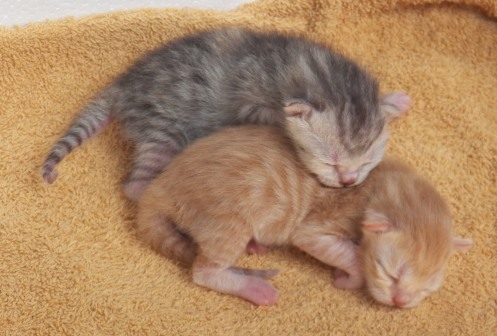 PLEASE CLICK CONTINUE READING FOR MORE ON OUR KITTEN ADVENTURE!

Before I get into our brief adventure with the kittens, here’s what we named them:

Looking in, to see their minuscule feet flailing in the air, and their blinded, baby faces mewing at me, I was overwhelmed with joy. We quickly claimed them as ‘our own’, though we planned to leave them to their natural habitat.

Little did we know, however, was that Cali, whenever we scared her away, was cautiously watching us from a perch across the yard, observing our every move. And so, as we came to realize, going close to her kittens was a mistake.

But luckily, we found another way to observe them: through the basement window! Without Cali’s knowledge, we would silently observe their movements, we would pray that Cali would return, we watched the kittens cuddle; it was heartwarming.

And finding them was truly a miracle, especially to us. Most of my family, including me, is allergic to cats, though we have always desired to have baby kittens. This, in miraculous turn of events, was our way of doing so.

Since we now felt responsible for the kittens, we wanted to try to feed them. We would put out fresh water and tuna (though making sure to take it away before night), but she would never accept it. Instead, each time we came by, she would, like before, dash out of her hiding place and continue to watch us. As we would come to realize, this was yet another factor of what would happen later on.

Heck, we even took a trip to the grocery store and invested a whopping $3 (😂) in cat food purchases- only to find that we would never be able to put them to use. See, the following day, (which was during our spring break), we went out for a day of fun and shopping. We were already cautious about the kittens, though we were hesitantly joyful that they had chosen to stay the night. However, when we came home, the kittens were gone, nest empty.

Those were a few phrases that were spoken aloud following the discovery, followed by many tears, though this is where my own part of the story comes in. I’m going to backtrack a bit, then flashback.

The night before the kittens left… I had crept downstairs at night. I wasn’t afraid, knowing that I hadn’t yet disturbed the kittens. But I made some sort of noise, and it caught Cali’s attention. She whipped her head around, and locked eyes with me. Her eyes were perfect circles, staring fearfully into the foggy window. I was fearful. Even worse, this would cause me to feel sole responsibility and guilt toward’s the kittens moving. And that night, I shed a few tears of my own, with my mom to comfort me. In a way, we all felt that it was our fault. Even so, I still feel responsible, and I was crushed by the kittens moving.

My entire family had become so attached to these kittens, it was so hard to let them go. We’ve taken numerous walks around the small forest in the backyard, to no avail. Either that means that they found a safe hiding place, or they were far away, never to be seen again (we haven’t).

We named them. We fed them. We watched them. Unfortunately, all good things must come to an end, but this was too soon; almost a tease.

One last important thing, though:

Just after checking the empty nest, I happened to spot Cali one final time, standing at the same perch as before. She had an indescribable look on her face, one that saddened me. She took one last look at her former home, and then turned around and walked into the forest. That was the last we saw of her, though at least we got to see her one last time.

Though we would have appreciated even seeing them being moved, we can now appreciate life, and we can also reminisce over the containers of cat food that to this day rest in the bottom drawer of my dresser.

Thanks so much for listening to this story; having the kittens built me up, and then crushed me, but I’ll always be touched by this experience. Have a great day! 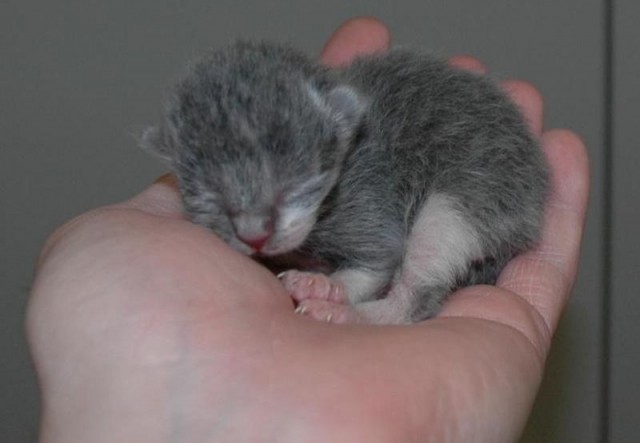 I would have loved to spend more time with Baby Mac, though I wouldn’t get the chance.

*No pictures were taken of our actual kittens, nor were they harmed or interfered with- we did not touch them, and apart from leaving food out and accidental incidences, did not disturb them.

6 thoughts on “A Tail Of Three Kittens”