In algebra, you can describe the constant increase or decrease of numbers in a pattern in two ways: as an arithmetic sequence, and as a geometric sequence.

In an arithmetic sequence, there is a pattern of numbers that are either increasing or decreasing through addition or subtraction by a common difference. Here’s an example of one:

Get it? If you don’t, here is another example, this time with addition:

This particular sequence increases with a common difference of 4.

A geometric sequence is a pattern of numbers that increases or decreases exponentially. In this case, numbers will increase by what we call a common ratio, or the amount that each value is multiplied by to reach the next integer in the sequence. With this, it is important to note that geometric sequence will always be multiplied, no matter whether you are increasing or decreasing. If you are decreasing, you instead use fractions. Here’s an example of a geometric sequence:

Each term is multiplied by 1/2, which is the common ratio. We note that 8 is the first term in the sequence (you’ll need this concept for later). Here’s another one:

In this case, the common ratio is 3. Understand how I got there? If not, ask me a question in the comments below regarding anything in this post.

Can a sequence be neither?

YES!! If a pattern does not increase or decrease at a constant rate, it is neither geometric or arithmetic. Take this one:

It resembles a geometric sequence, yet it does not have a common ratio. Understand?

There are algebraic formulas to find any term in an arithmetic or geometric sequence. We have to remember that the first term that appears will be counted as the first term, the next consecutive term as the second term, and so on.

Let’s start with arithmetic. Here is the formula:

It looks very confusing, so let me explain it. an is essentially the same thing as y in an equation, except this time it stands for a number a to the nth term. The nth term is any term in the sequence. For example, n might stand for the 10th term in a sequence. We don’t do anything with the first a- it merely stands for the answer to the equation, such as when we find x = __. The a with the one stands for the first term in the sequence, the n is the same thing as the first n, the numbered term we are trying to find- we substitute it in. The d stands for the common difference, which you now know how to find.

When you substitute each value in, you should be able to complete the right side of the equation so that you end up with something like an = 7. (I can’t figure out how to type subscripts- I copied the above formula from Google.)

I know that this is all so confusing, so let’s say we want to find the 24th term of this arithmetic pattern:

We know that the first term is 5, and that the common difference is 5 as well. We substitute these values (along with 24 for n) and solve it this way, like we would with normal order of operations: 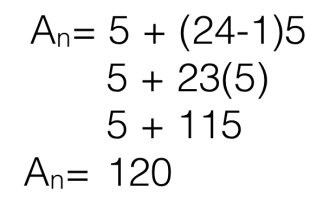 Note: technically, the first n should also read 24, even though we do nothing with it.

Now… geometric! Here is the formula for geometric:

Once again, n means the same thing, as does the second a. All we have to do is substitute the common ratio (discussed above) for the r and then solve the same way we did with arithmetic equations.

There is a lot more to this topic, so I encourage you to do research on these types of sequences in case I don’t cover them in a future post. One last thing: click on the Quizlet icon below to access the study set for this lesson. I included some tricky questions!

Until next time, thanks for reading!