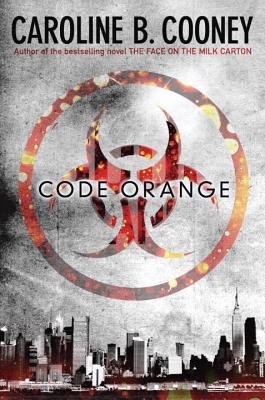 “Whether I live or die, whether I’m scarred or not, that stuff doesn’t matter… the virus would exist.”

Good afternoon! It’s Tuesday, so I have chosen to review another of my favorite books from school this year: Code Orange by Caroline B. Cooney. I hadn’t yet read any books from Caroline B. Cooney before reading Code Orange, so I wasn’t sure what to expect. After finishing the book, I would love to read many of the other novels written by this author. I must say, I really enjoyed reading this book for pleasure as the book was really suspenseful, and kept me hooked in; it was written extremely well.

During the first chapter, we are introduced to Mitty Blake, the main character in the story. Like in my previous book review, the story takes place in New York City, and we start the story by finding ourselves in the biology classroom of Mitty Blake. Prior to the present day, his teacher had assigned a biology report on contagious diseases- and, as we eventually would come to expect, Mitty forgot all about it. Mr. Lynch (the biology teacher), to Mitty’s surprise, expected full pages of notes by the following Monday. The only problem was that Mitty had absolutely no research completed- and was travelling to Connecticut (where ‘there was not a single Barnes and Noble around’.)

But Mitty Blake would not worry about it. Besides, he had plenty of other things to do: keeping in touch with his girlfriend, Olivia, watching TV, and hanging out in the countryside. Nevertheless, he did find the urge to hand something in, so he tries to find books to do his research out of. Mitty ends up looking through old books that his mom (an indoor library designer) had placed in their living room. While looking through a particularly old book, Mitty finds a sealed plastic bag that contained what looked like small, powdered scabs.

Earlier in this post I mentioned how the book was suspenseful and hooked the reader in. One thing about Code Orange that I really liked that added to the suspense of the story was a simple line at the end of each chapter. It stated, ‘It had been _ days since Mitty Blake inhaled the scabs’. This lead me to believe that the disease was beginning to grow inside of Mitty. This became especially suspenseful later on in the story when Mitty nears the end of the period before symptoms of the disease began showing.

After Mitty’s discovery of the smallpox scabs, Mitty becomes absorbed in his research about Variola Major. In fact, after becoming worried about getting the disease himself, Mitty posts about the scabs online and is answered by several scientists. The only problem was: Mitty was offering to give them away. In the FBI’s eyes, Mitty was the beginning of the next bio-terrorism attack.

It is my wish to give each book the proper review that it deserves, but in order to do so I must review the entire book. Therefore, if you don’t want ‘Code Orange’ to be spoiled, I would encourage you to finish reading this blog post here. I definitely would recommend this book to you.

This final part of the book had me on the edge of my seat. I loved the way the ending was written, especially when we were on both sides of the story: FBI’s perspective and Mitty’s perspective. Mitty was walking in downtown NYC and was suddenly stopped by a woman who was inquiring about the scabs. Rather reluctantly, Mitty made the mistake of going with her.

On the FBI’s side, multiple FBI agents came to Mitty’s school to investigate him, only to find that he was missing. With the help of Olivia and Mitty’s friends, though, the FBI is able to begin to piece together information- but is still at a loss as to how to rescue Mitty.

After being taken captive by several bio-terrorists and locked in a basement, Mitty attempts to escape by thinking of clever actions: he attacked the bio-terrorists (and failed), he shut the electricity off (but failed to escape), but finally Mitty found a reasonable means of escape.

At this point, Mitty was a mess. He felt as if he had smallpox. He had a terrible fever, a headache, and could barely move. However, much to his success, he faked smallpox scabs, and locked himself inside of the basement with the bio-terrorists. Unfortunately, while the terrorists would not be able to escape, neither would Mitty.

By the end of the story, Mitty escapes only due to information gained by the FBI and by decreasing the air quality in the basement. As it turned out, Mitty did not have smallpox at all, but was just suffering from beatings from the bio-terrorists. The very last line hinted that Mitty and Olivia would continue to be a couple from there on out.

This would definitely be a book I would recommend for you to add to your summer reading list- I really enjoyed reading this for pleasure. Stay tuned next week as I review another book from my school reading this year. Thanks so much for reading!