Hello! This week, instead of just a math problem, I wanted to teach you guys something we have been studying in school. Today, we’ll be focusing on percentage- but taken to another level. 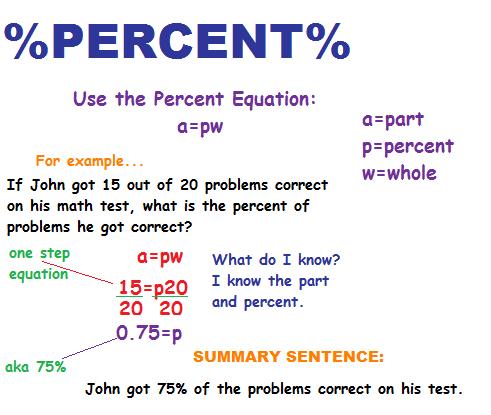 I know it looks intimidating, but i’ll walk you through it. Another way to find percent is by using the percent equation: a=pw. The a stands for the part, the p stands for the percent, and the w stands for the whole. Before we start the problem, we have to determine what we know. Based on the problem given, we can figure out that the part is 15 and the whole is 20. We don’t yet know the percent, so that is what we are trying to figure out. As you can see in red, we substitute the variable for what we know. We substitute the a (part) for the 15 and w (whole) for the 20. We leave the p in its place, although normally the variable comes after a number. As this is a one-step equation, we have to isolate the variable (p). To do so, we divide both sides of the equation by the coefficient (20). As seen in purple, we find out that 0.75 is p, or the percent. 0.75 is changed to 75%. Finally, we write a summary sentence to conclude the problem. For this example, ours was John got 75% of the problems correct on this test.

Now that you have learned more about this method, next week i’ll be asking you a few questions based on this where you will be required to find not only the percent- but also the whole and part.