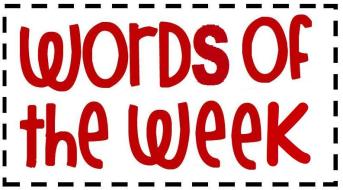 This past weekend, I had most of my posts set- until I realized that I had gotten the date wrong and scheduled them to publish on a Monday. Then, I was unable to do words of the week over the weekend. Even though it is late, here are 5 new words courtesy of Merriam Webster.

Example Sentence: The most successful athletes find a way to maintain equanimity in the face of disappointment and failure.

bipartisan; adjective: of, relating to, or involving members of two parties; specifically : marked by or involving cooperation, agreement, and compromise between two major political parties

Example Sentence: The bill has bipartisan support in the Senate, since it stands to benefit both Democrats and Republicans equally.

sinecure; noun: an office or position that requires little or no work and that usually provides an income

Example Sentence: The king was in the habit of rewarding his loyal supporters with sinecures.

dewy; adjective: moist with, affected by, or suggestive of dew

Example Sentence: The lawn was dewy and cool on our feet as we set off for a short barefoot walk just after sunrise.

kangaroo court; noun: a mock court in which the principles of law and justice are disregarded or perverted

Example Sentence: The press decried the tribunal as nothing more than a kangaroo court, meting out savage and arbitrary justice.

Thanks for reading! Come back next week for more new words!