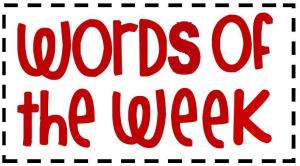 Hey guys! Here are 5 new words to add to your vocabulary, courtesy of Merriam Webster.

Example Sentence: “Keegan, effortlessly ebullient even on his worst days, is probably the easiest person in the history of civilization to have a conversation with….”

underwhelm; verb: to fail to impress or stimulate

Example Sentence: “This is a controversial question with no pellucid answer.”

Example Sentence: During the reception, a three-piece string band performed for the delectation of the guests.